Clinical and mycological evaluations of horses affected with cutaneous lesions in Ardabil, Iran

The fungi are a part of the normal flora of the skin of animals, including horses. Although some of the fungal species are pathogen, most of them are opportunistic and can cause opportunistic fungal infections. The present study aimed to identify pathogenic and saprophytic fungi isolated from horse cutaneous lesions. In this study, 183 horses of eight horse-riding clubs were dermatologically examined in Ardabil city. In each case, the clinical sample was obtained from the cutaneous lesions. The specimens were inoculated on Sabouraud dextrose agar plates with chloramphenicol and cycloheximide, as well as direct microscopic examination of fungal elements. 25 cases of the 183 examined horses had cutaneous lesions (13.6%). Among the cutaneous lesions, alopecia (in 13 cases) and crust (in one case) had the highest (52%) and lowest (4%) frequency rates, respectively. 92% of inoculated samples (23/25) were positive on fungal culture media, of which only four samples (17.3%) isolated as pathogenic fungi (Microsporum canis and Malassezia pachydermatis). In other cases, only saprophytic fungi were isolated. The highest and lowest isolated saprophytic fungal species were Aspergillus niger (47.8%) and Rhizopus (4.3%) and Stemphylium (4.3%), respectively. Also, Rhizopus and Aspergillus niger were the highest isolated fungal species in horses without any dermal lesions (25%). The study showed pathogenic fungi including dermatophytes were isolated from a relatively low percentage of cutaneous lesions in horses. Saprophytic fungi are likely to play a role in horses cutaneous lesions and sometimes may cause these infections or worse them.

Skin is the largest organ in the body, with various functions, including the first defense of the body against pathogens, body temperature regulation, and a sense of acceptance. Horse's skin has a significant aesthetic significance as well. Any changes in the natural appearance of the skin can be a sign of primary skin disease or a secondary form of other general illnesses (Pascoe and Knottenbelt, 1999). Some microorganisms are a natural flora of the skin; in some abnormal conditions, opportunistic infections occurred. Among the factors affecting these changes, genetics, malnutrition, degeneration of the epidermis of the skin, the presence of skin folds, heat and moisture on the skin, fatty acid secretions, stress, allergies, and high fat production can be mentioned (Cafarchia et al., 2013; Coles et al., 1978).  The most important saprophytic fungi isolated from animal skin and hair include Penicillium, Aspergillus, Alternaria, Mucor, Scopulariopsis, and Chrysosporium (Aho, 1983; Bourdeau et al., 2004; Stojanov et al., 2007). In suspected dermatophytosis, many saprophytic fungi have been isolated in the culture medium; they are not considered as part of the pathogenic fungus, but some of these saprophytic fungi are present in conditions such as immunosuppression, they can be pathogens. Some cases of dermatophytic fungal lesions in humans, domestic animals, and wildlife have been observed; as a result, some researchers believe that saprophytic fungal infections should be treated and can lead to fungal infections if left untreated (Aho, 1983). The fungi responsible for horse diseases include Microsporum canis and Microsporum equinum, Trichophyton equinum, Aspergillus, Alternaria, and yeast species. Dermatophytes, Cryptococcus, and Aspergillus are mainly considered due to global spread and their zoonotic potential  (Cafarchia et al., 2013). One of the opportunistic yeasts in horses is Malassezia that can also be distinguished from the upper layer of the skin of many livestock, however, there is a controversy about the natural skin of the horse (Bond, 2010; Bond et al., 1995).  Some skin contaminants, such as dermatophytosis, are highly contagious and can cause skin disease of all ages (White et al., 2006). The loss of local hair resulting from this type of fungus has very adverse effects on the performance and financial value of the horse (Fadok, 1995; Irimie et al., 2011).

Diagnosis of fungal infections will provide a reasonable prognosis of their disease. Epidemiology, clinical signs, and diagnosis of fungal diseases are essential for therapeutic strategies(Cafarchia et al., 2013).  The purpose of this study is to evaluate the clinical examination of lesions of horses and investigate the presence of various fungal species in these lesions and even apparently healthy skin and the relevancy of these fungi with these lesions in horse riding clubs in Ardabil city.

183 horses of 8 riding clubs of different Ardabil city districts were examined, and the types of skin lesions were recorded. After clinical examination of livestock, the horses with specific lesions were selected, and the demographic data of each case, such as the name of the club, the horse's name, sex, color, race, age, and clinical features of the lesions, were recorded. Hair and skin specimens were transferred in paper bags to the fungal laboratory of the Faculty of Veterinary Medicine, University of Tabriz, Tabriz, Iran. The active area of the suspected lesions was collected by scrapping and hairbrush sampling methods. Hair samples were analyzed with 10% potassium and lactophenol-cotton blue. After placing the coverslips for 10 to 15 minutes, they were placed in a humid chamber and then examined for the presence of fungal elements, including hyphae, arthroconidia, and fungal spores. In the case of dandruff samples, clarification was performed only with 10% potassium, and, also, a part of dandruff was stained with Giemsa to evaluate the presence of yeast cells. A portion of each sample was cultured on agar media, sabouraud dextrose agar containing chloramphenicol (SC), and sabouraud dextrose agar containing chloramphenicol and cycloheximide (SCC). Cultured media was incubated for three weeks at 25 to 28 °C and examined daily during the incubation period. Statistical analysis was performed using SPSS-18 software. Chi-Square test with a 95% confidence level was used to measure the relationship between variables such as age, sex, color, race, involved areas, and lesions. In the event of the growth of fungal agents on the culture medium, the fungal species were detected based on the macroscopic colony specification in the culture medium and the microscopic properties of mycelia, macroconidia, microconidia and the validated by de Hoog presented methods (de Hoog and Guarro, 1995; Katiraee et al., 2016). Also, in some cases, slide culture, DTM, hair perforation, and urease tests were used to diagnose dermatophytes.

Table 1 Frequency distribution of skin lesions based on sex, age of studied horses, and fungi isolated from the culture medium. Direct microscopic examination of the 25 specimens in 14 samples (56%) was able to detect fungal components, including pathogenic fungi such as Microsporum (Figure 5) and Malassezia (Figure 6) (Table 2). Among the 25 specimens obtained from the skin lesion horses that were cultured, 23 specimens were isolated (92%), and only two samples were negative for fungal cultivation (8%). Totally, 48 fungal species were isolated from the culture. The fungi were obtained in culture, including saprophytic fungi such as Aspergillus flavus (n = 6), Aspergillus niger, (n = 11), Aspergillus terreus (n = 3) Alternaria (n = 7) Cladosporium (n = 8), Mucor (n = 3), Penicillium (n = 4), Stemphylium (n = 1), Rhizopus (n = 1) and Pathologic fungi in opportunist condition of skin disease such as Microsporum canis (n = 2) and Malassezia pachydermatis (n = 2) (Figures7).

In the present study, saprophytic species were identified among the horses with skin lesions, including Aspergillus flavus (24%), Aspergillus niger (44%), Alternaria (28%), Cladosporium (32%), Mucor (12%), Penicillium (16%), Stemphylium (4%), and Rhizopus (4%). In dogs and cats suspected of dermatophytosis, Aspergillus, Penicillium, Rhizopus, and Alternaria were also obtained (Nichita and Marcu, 2010). Alternaria is isolated in depressed deer with dandruff symptoms, hair loss, as well as in a horse with nodule symptoms in the skin (Coles et al., 1978; Stojanov et al., 2007). The reason for differences in the fungal organisms can be due to some factors such as the geographical and climatic conditions which affecting environmental fungi and the host. Age is also one of the factors discussed by some researchers. The sensitivity of animals depends on their immune status to a great extent. Younger animals are more susceptible to various types of contaminations, including fungal infections. In the present study, two cases of dermatophytosis were found in less than two years old horses. Malassezia is considered an opportunistic infection. Some of the factors that can make this yeast a disease state can be stress, corticosteroids, degradation of the epidermis, malnutrition, genetic causes, heat, and humidity (Cafarchia et al., 2013; Crespo et al., 2002). In this study, in the history of both horses infected Malassezia pachydermatis, dealing with stress, including severe injuries resulting from collision with a roadside fence in one case and entering a new horse pension and changing the environment of life were among other factors. Other researchers have also pointed out the weakness of horse safety as a factor in Malassezia overgrowth (Nell et al., 2002; White et al., 2006). The tropical weather and the unacceptable condition of animals in the winter can play a significant role in the development of yeasts and other fungi. (Paterson, 2002; Marcon and Powell, 1992; Guého et al., 1998). The climate of the region, the health of the livestock holding, the sampling and sending of samples to the laboratory, and environmental fungi affect the results of the study. Certainly, environmental fungi affect the results of this study. These fungi are present in soil, grains such as barley, alfalfa, fertilizer, drinking water, and air. It has been shown that the frequency of some species in summer is higher (Kushida et al., 1979). The keratinophilic fungi isolated on the skin of animals kept outside of the house are higher than inside houses (Aho, 1983). This study was carried out in early spring and during this time, Ardabil had a cold climate, which is why the amount of fungal infection in this study is low, and the studies that have been reported by Malassazia flora are mostly in warm and wet countries and coastal cities such as Spain and Italy (Cafarchia et al., 2013; Crespo et al., 2002) or they have been carried out in the summer (Paterson, 2002).

The definitive diagnosis of fungal infections is based on the presence of clinical signs and fungal techniques. In this study, saprophytic fungi were more than pathologic fungi among most of the cutaneous lesions. Therefore, saprophytic fungi are likely to contribute to the formation or severity of skin lesions. These findings in epidemiological and diagnostic studies can be useful and used in practice. If other pathogens weren’t identified, the probability of these agents is considered, and if necessary, the treatment of these agents should be considered alongside other therapies.

The authors declare that they have no conflict of interests. 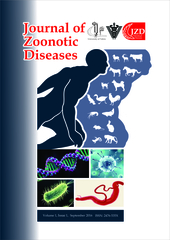